VICTORIAN MINISTERS TALK ON THE TRANSPORT CHALLENGES AHEAD

As recently as the early noughties, transport industry insiders say that it wasn’t uncommon for female workers to still be called “darl”.

While many high-powered male executives at Victorian transport companies knocked back drinks over long lunches, women working in administrative roles were being pushed to field customer complaints due to their ‘sympathetic’ nature.

Who would have thought that, by 2018, Victoria’s three transport ministries – some of the government’s most important posts – would be held by women? 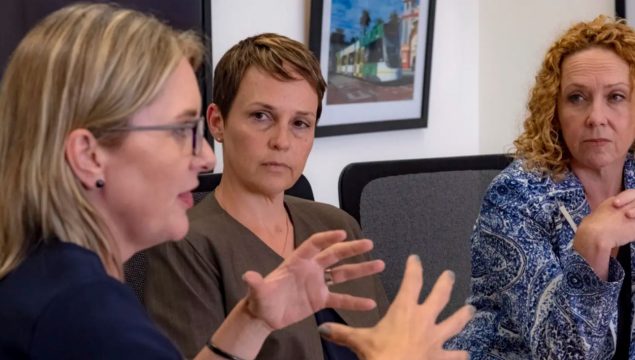 They will oversee a multibillion-dollar infrastructure program, including construction of up to five road and rail tunnels, two of which run beneath the Yarra River.

The ministers agreed to sit down exclusively with The Age weeks into their new roles to discuss the transport challenges ahead.

Just 16 per cent of Australian engineering students are women, while one in five Australasian rail workers are female.

Speaking from her Spring Street office, Ms Allan wasn’t shy about calling out the problem.

“Over the past four years, I will say that I’ve been in many meetings where I have been either the only or one of a very small number of women in the room when we’ve discussed our transport infrastructure projects,” she said.

“I’ve learnt a lot from that experience about how to be very direct and clear in terms of what the government expects of its delivery of projects.”

Between now and 2022, major construction for the $11 billion Metro Tunnel and the $6.7 billion West Gate Tunnel will get under way.

The image of having women in charge of the ambitious task might be pleasing, but Labor insiders say the politicians’ own records prove they were chosen on merit.

First-term MP Melissa Horne’s appointment surprised many, but sources close to Ms Horne describe her as smart and highly capable; a ‘fixer’ in the face of crisis.

She’s worked as public affairs director at the state’s Transport Department and more-recently at the Level Crossing Removal Authority where, as communications director, she is said to have run a tight ship while preserving a direct line of communication with Ms Allan’s office.

The Williamstown MP has told transport bureaucrats that getting trucks off residential streets in her electorate was “top priority” and said that improving bus services would be a focus.

Last weekend, she announced $16 million for 100 new buses at Transdev, and that the multinational company’s $1.7 billion contract would not be extended following disastrous performance.

Train or tram meltdowns are likely, with heat-related trouble starting to show.

Earlier this month, 400 tram services were cancelled on a 30-degree day, causing the suspension of two tram routes, while 111 trams were out of service on Monday due to damage caused by heavy rainfall three days earlier.

The possibility of public transport strikes loom as train and tram workers negotiate their EBA next year. The Rail, Tram and Bus Union shut down the city’s rail network during negotiations in 2015.

And, as train overcrowding worsens, Ms Horne faces ongoing calls from the Public Transport Users Association for 10-minute services outside of peak times.

“I’d have to explore that a little bit more,” she said.

“I do think with the new high-capacity, bigger trains, that we’re moving to a turn-up-and-go service. That is some of what the PTUA is calling for, that’s the start of actually delivering that.”

Ms Allan then pulled out a pen and paper and started drawing a map.

The circular lines represented the suburban loop and airport rail – twin train projects she helped sell to voters in the lead-up to the election.

The suburban loop will connect almost all city lines in an orbit around the city by 2050, while the airport tunnel will link Southern Cross and Melbourne Airport via Sunshine.

Theoretically, this means that a commuter from Burwood could get to the airport on a single train ride.

But not for another three decades.

Ms Allan acknowledged that the loop would take a while to build, but called for voters’ patience.

“But they also take leadership to get them off the ground and get them going.”

As part of the works, Labor plans to build the western rail plan, promising high-speed trains to Geelong and Ballarat, with trips from Melbourne taking only 35 minutes and less than an hour, respectively.

The project, set to finish in 2032, would include electrifying train tracks to Wyndham Vale and Melton.

In response to questions about new rolling stock, airport train frequency and whether electrification could occur sooner given crisis-level overcrowding, Ms Allan deferred to the yet-to-be-completed business cases.

“I’ve learned to listen to the experts,” Ms Allan said.

Driving thousands of kilometres through Victoria in her previous role as Victorian Regional Development Minister should come in handy for Jaala Pulford, as she takes on the role of Roads Minister – the first woman to do so.

A solution to heavy traffic on roads at the city end of the Eastern Freeway such as Alexandra Parade in Clifton Hill, is still unclear despite the Eastern carrying 100,000 extra cars after the North East Link is built.

Whether the Melbourne Metro 2 – another underground rail line linking Clifton Hill and Newport – will play a role, is yet to be seen.

“Rapid population growth in Melbourne’s outer suburbs and being able to ease the impacts of congestion on people’s lives is very much at the forefront of my mind,” Ms Pulford said.

As the interview came to an end, close to 5pm – just as Melbourne’s traffic was hitting its peak – Ms Allan articulated what she and her two colleagues, like many Victorian commuters, want.

“We’re all parents, we all want to get home to our kids.”